skip to main | skip to sidebar

On June 21, 2015 I was in Kenya speaking to the church at Masai Corner.  My message that Sunday was, "Building bridges of love that connect people to Jesus Christ and each other."  I shared how my home town (Charleston, SC) and my home church (Ashley River Baptist Church) were similar in many ways to Mombasa, Kenya. Our towns were both Coastal port cities, both separated by a river on both sides.  One difference however, Mombasa has a bridge on the north side and a ferry to the south.  Thus, the illustration of a relationship based on a bridge versus a ferry resonated with them....

Rewind... a little background.  Over four years ago, our ARBC missions team began to pray about developing missionary partnerships.  Chris & Lisa Moore (www.real4christ.org) were presented to us by church members who had recently visited there (2011) on a homecoming trip for her, having been raised there by missionary parents, and wanted to show her husband and daughter where she grew up....  After Chris & Lisa then visited ARBC three years ago (2012), we began to plan a mission trip there.  Two years ago (2013) that trip dwindled down for various reasons and was canceled.  My two daughters, Sierra and Sky, were still led of the Lord to go, and they did.  They became messengers of hope and possibility to ARBC, Chris & Lisa visited ARBC again last year (2014) and another trip was forged, this time 12 team members were sent out by ARBC to begin to build this bridge of relationship with the churches and ministries of Real 4 Christ... our first personal, supportive relationship with a cross-cultural missionary has begun.

The hope of the ARBC missions team, and a growing number of ARBC members, is that this relationship will be a bridge of constant hope, love, prayer, support and partnership.  Not a "ferry relationship" with barriers of complication, differences and distance that remain, but a bridge that will connect us personally with each other, on a spirit-led moments notice.

The culminating similarity of our two eastern coastal towns that resonated with the 100's of Kenyans in attendance that Sunday, was the similarity of pain felt...., caused by those who were led by Satan with the intent to "steal, kill and destroy" relationships. Still fresh on the minds of the Masai Corner church was the horrible massacre of over 180 college students (4/2/2015), many Christians, in the town of Garissa, Kenya who were killed for their faith by those with a devious hope to drive fear and division among the Kenyan people. A relationship bridge was developing before us... as I shared about the horrible tragedy and amazing forgiveness of the disastrous killing of godly people in Charleston, SC (6/17/2015).... that too, an effort by Satan to "steal, kill and destroy."  As we wept and prayed together for our Charleston home community, God was still at work building bridges in Kenya AND in Charleston!  After that Worship service (6/21/15), Masai Corner Church, Kenya, held hands, together.. along with those in Charleston who would be holding hands across Charleston when the sun rose there.... building bridges of love to connect people to Jesus Christ and each other.... we connected... a relationship is forged in so much we have in common...

Below is an audio experience that... you may just hear the voice of God in....
The Sounds of Kenya:
Our ARBC team traveled by safari off road vans, through rivers, and herds, deep into the Kenyan hills, to visit 4 church plants. "If you are not careful, you might miss the voice of God" Chris Moore said, through tears after worshiping with the R4C Dzomba Fellowship Church Plant

Dzomba Fellowship Church Plant, Kenya: There is no one Like Him Who sits on the high seat and He sees the heavens and the earth"

a few days before, we learned of the horrible massacre back in our home town Charleston, thus this excerpt from my message that Sunday:
Message: Pastor Kent shares @ Masai Corner Church, Kenya Africa "Building Bridges of Love" 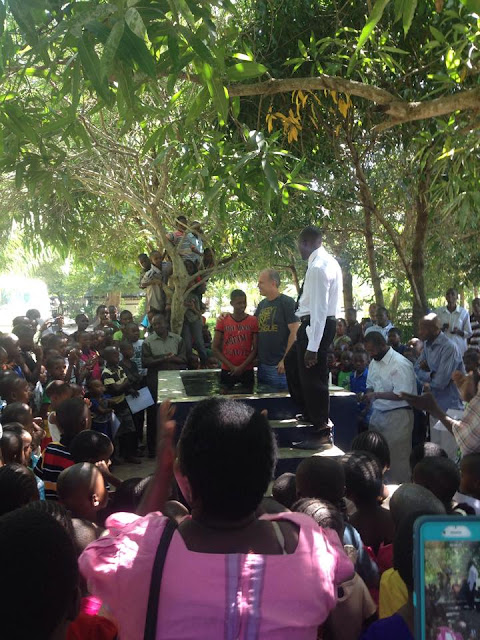 Kelvin Charo, is baptized.... "connecting people to Jesus Christ & each other"

#ARBCKenya
#missionmombassa
Posted by Pastor Kent at 9:25 PM No comments:

Here is where Pastor Kent blogs about life as it happens. You are welcome to comment, or connect with Pastor Kent.